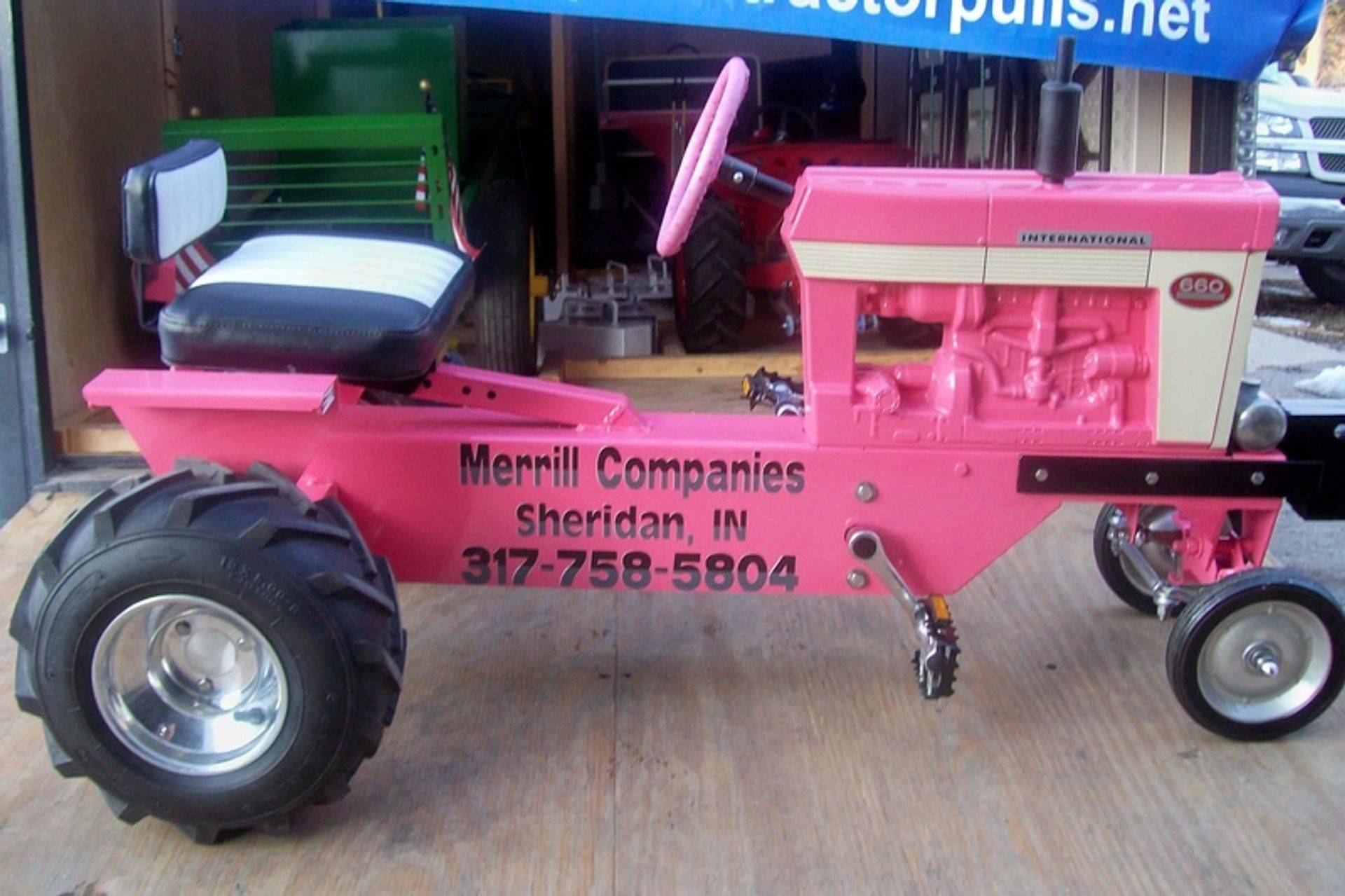 In the words of Al Michaels.

"Do you believe in Miracles?" Oh my God she did it

Praying for a good showing going in, she did it on more guts than she had ever shown. Start of the First run, Miranda had just put one of what would be 11 Full Pulls Finishing off the first run with a full pull. The field of girls was one of the best ever. Kayla has to match Miranda's second full pull. And now there are only 2 friends left. The final run by one of the strongest pedal pullers over the last 4 years. Miranda 32' 1" The whole palace was focused on Miranda's run, and were still on their feet as Kayla closed in on the distance. When she finally climbed off the place was hushed for the distance... No one could tell if it was enough........ 33' 3". Trophies are presented. Miranda has her 4th straight National Trophy and will be adding to her 3 straight International Trophies including two championships. There were so many great 10 year old girls not holding a trophy it seems unfair. Kayla has her first National Trophy to go with her three state trophies. This was the dream of our house and more than anyone else; Kayla's. A dream that she pedal against the best 10 year old pedal puller in the world for the championship. Her dream came true in that, it was just them in the end, as it was that first day in Canistota SD four years before. In 4 years Kayla has come out on top only three times, yet she never ducked the chance to face her friend. Who was to win was not the dream. The dream stopped at the beginning of the last run and this time the team with the ball last won. This is way beyond dreams. This was Kayla's dream season - she did not always win, but she did rise to occasions. We only went to one pull not run by professionals and she built a rhythm that carried her to the place beyond dreams. Thank you Lord for this trophy and this friend to push her to her best. As the two friends step away they know there is a next time at the International Championships if not before. The Lord brought them together for a reason and he had a hand in Saturday at the National Championships. Kayla will have good days and bad in her life, but she will always have this memory. For this one day she was the best 10 year old of either sex, because nothing less would have been good enough to edge her friend.

Please excuse our prideful-ness and any slight errors in the exact details. These are the things we put together from our memories of the moments. One other thing for those who think everything is rigged. Kayla did not one time all year practice on the equipment, we did have a pull or go to one nearly every week. The girls are very active in sports and ride their bikes.

Kayla has note mentioning her

in the Omaha World Herald in the

in the column of Noteworthy individuals

Kayla was interviewed on KMA Radio

during the afternoon show on

The following article was printed in several local papers including the Lenox Time Table on October 9, 2008

Kayla Myers of Lenox IA was crowned the 2008 10 year old Girls National Pedal Pull Champion in competition on September 27th at the Corn Palace in Mitchell SD. The top three finishers in state competition are invited attend the National. 22 States are eligible to send contestants. Due to gas prices and the economy some drop off in numbers was expected. 351 boys and girls made the trip to Mitchell. Hence the fluff was gone only the ones who truly believed they could win showed up.

Kayla (the Iowa State Champion) was the 14th competitor while her friend Miranda Painter (Montrose SD, current International Champion) was 13th. Among the other girls were no less than 6 to 8 former National place winners. After the first round there were 11 full pulls including the two friends. A full pull this day was 35 feet. One after another the majority of the pullers finished between 30 and 33 feet. As the round ended there were just two full pulls. Miranda and Kayla would pull for first place. Their dream had come true they were pulling against each other for the title, they added another 100 pounds. The only problem is they had not faced the fact one would be second. By this time the entire crowd was focused on this pull off. Miranda went 32’1”, and then it was Kayla. She went about 29 feet with out problem and then seemed stopped, but she found away to muscle the pedals around on pure guts. When Kayla climbed off the crowd, which was screaming for them both, got quiet for the measurement. It was written on the pad and displayed for the crowd 33’3”, she was the National Champion. The two friends stood next to each other to accept their trophies for first and second.

This is Kayla’s 4th year of pulling and was making her second trip to the National Championship. Miranda who started at the same time won her 4th National Trophy and will be trying for her 4th International trophy as she defends her International Championship for the second time. Kayla will be in her first International and their next dream is to renew the pull off for the world title next summer. Once again the two girls may have been close to the overall coed title as the boys did not match them with the same weight.

Kayla is the daughter of Ken and of Lenox and was cheered on by her sister Kendra. Kayla was the only pedal puller from southwest Iowa to place at Iowa State and therefore the only National contestant from the area. The Champion receives a saving bond and a three-foot tall trophy. The top five finishers in Nationals travel to the International Pull. Additional pictures and other details are available at www.myerspedaltractorpulls.net

**It is very possible the Girls went 1st and 3rd overall in a comparison of distance top Boy was 33'1", if the weight was the same as it appeared to be.

*** Another note is to the best of our knowledge no girl in this set of now 10 year old girls have ever repeated as champion (we can not know about every year because of a lack of information on line) - Several have placed multiple times, although, it seems Miranda's 4 may be in the lead for overall trophies at nationals. This gives perspective to the difficulty in winning and the incredible quality in every participant.

I have seen a couple of these and none of the later winners had won but these are the available National results for this group of girls.

Never a repeat National Champion for these incredible young ladies. The last three years established the top three as Hall of Fame members in anyone's book.

Pride in our Daughters at State Competition in 2008

When we say anyone can work their way to the top. This girl had never come close to the Iowa State title - needless to say a national title. This may be the 15 minutes in her life, who knows. I do know this shy husky girl will remember this forever.

Home of Iowa State and Ability, fitness work, pulling only on professional quality equipment like state, and a big heart can take you to the top, too. Sorry if our pride is showing. You will just have to put up with us, because it is our pedal pulls that demonstrate our quality not the website.

We are very proud of the kids that pedaled with us this first year and if you keep working out with quality equipment at quality pulls you to will find that extra foot or two it takes to win it all. Ask Kayla!!

Kayla was the only puller south of I-80 and west of I-35 to place in Iowa. Boy or Girl. We know some of the best kids in the state are in this area. Quality pulls, Quality equipment, and then sanctioned. Miranda Painter is three time South Dakota Champion and two time International Champion, along with numerous State and National places over the last 4 year. Kayla will make her second trip to Nationals in the last four years, this is her best career state finish as runner-up. They both started pulling in the mid summer four years ago. This year they are one and one, time for the rubber match at the one and only true National Pedal Pull.